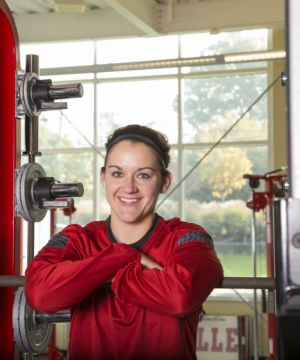 Often times the most successful teams are the ones with the greatest amount of talent that is healthy and available on game day. This presentation will take a look at the driving forces behind the University of Louisville's philosophy and how it applies to the women's basketball team in its quest of winning championships.

Before joining the Purdue staff, Molly was a graduate intern at the University of Minnesota, completing her Masters of Education in Applied Kinesiology with a Sport and Exercise Science emphasis in 2013. While at Minnesota, she worked with multiple teams at the university, and was the strength and conditioning coach at Cretin-Durham High School in St. Paul, Minnesota.

Molly began her career in 2008, where she started as a strength and conditioning intern at Marquette University. In 2012, she completed her final undergraduate semester as an intern at EXOS, formerly Athletes' Performance, in Phoenix, Arizona, working with athletes ranging from general population to Major League Baseball players. In May of 2012, she graduated with a Bachelor's degree in Exercise Physiology.

She is the co-author of a research article published in the Journal of Strength and Conditioning Research in August 2015 titled, "Mechanical Determinants of Faster Change of Direction and Agility Performance in Female Basketball Athletes." Her areas of expertise lie in power development and applied sport technologies.