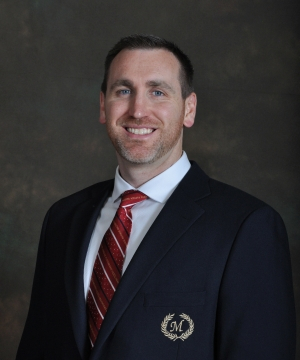 In this talk Sanderson will review the Michigan Basketball Strength and Conditioning philosophy. The lecture will start with a review of the assessment process which includes movement screening, performance testing and use of technology to evaluate each basketball player. From there Sanderson will review how the assessment information gets converted into an individual plan. Also included is an overview of training philosophy, periodization, the development of strength/power, mobility/stability and recovery strategies.

In his nine previous seasons in Ann Arbor, Sanderson has helped the Wolverine basketball program to seven NCAA Tournament bids, including trips to the 2013 Final Four -- the first for the program in 20 years, followed by a return trip to the Elite Eight in 2014 and an appearance in the National Championship game in 2018. In addition to NCAA postseason play, U-M has won two Big Ten titles, including 2012, which was the first for the program since 1986. The Wolverines also won their first outright Big Ten title in 28 years in 2014 with a 15-3 record, winning the league by three games and have won the Big Ten Tournament in back-to-back seasons (2017; 2018)

With the women's golf program, Sanderson has five NCAA regional appearances -- four team and one individual. In 2016, the women's team advanced to just the program's second-ever trip to the NCAA finals. The following year, the Wolverines repeated the feat advancing again and tying for 16th -- the highest finish in U-M history.

Before joining the Michigan staff, Sanderson spent three years (2006-09) working at Clemson University as the men's and women's basketball strength and conditioning coach, as well as the director of the Littlejohn Coliseum weight room. During Sanderson's time at Clemson, the men's basketball team won 20 or more games for three straight seasons -- a first in program history. Also, during those three seasons, only North Carolina and Duke had more wins than Clemson in the ACC.

Sanderson was a high school basketball standout at Lexington High School in Ohio. He was a four-year varsity starter and earned All-America honorable mention from USA Today and Street and Smith magazine. Sanderson was also named first team All-Ohio as well as earning Division II Player of the Year in 1997.

Sanderson and his wife Jennifer (Sessor) have three children, Jonathan and twins, Joshua and Jillian, and reside in Ann Arbor, Michigan.