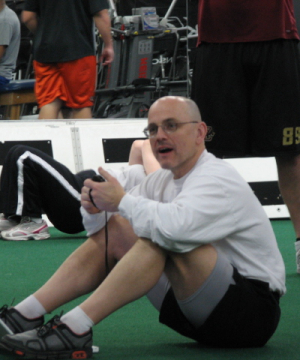 Speed and Power- Everything Old is New Again

A look back at the early Charlie Francis info and, how we may have accidentally missed the boat on speed and power training. Presentation will examine our fascination with vertical training and contrast that with new/ old info about horizontal power and speed. Emphasis will be on sprint, concepts, sled training and speed development.

During his career Boyle has been involved in training and rehabilitation with a wide range of athletes, including stars in every major professional sport. In addition, Mike has served as a consultant to some of the top teams in the NFL, NHL, as well as numerous division one athletic programs. Boyle has been involved in Olympic Gold Medal efforts in women’s soccer, women’s ice hockey, gymnastics and judo.

Mike’s impact is now being felt globally through his website www.strengthcoach.com, through his Body By Boyle Online education service, the Certified Functional Strength Coach certification and, MBSC-Thrive a licensing partnership.

In addition to the best selling Functional Strength Coach series Mike has produced a total of 27 video and DVD projects all of which are available at www.performbetter.com