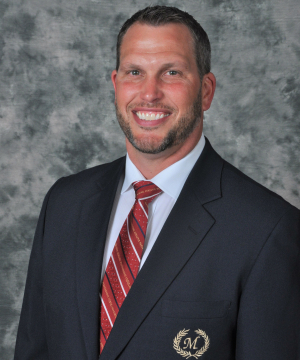 Mike Joseph is the Director of Strength and Conditioning at West Virginia University, where he oversees all 17 Varsity Athletic Programs and has direct oversight over the Football program. Joseph was hired in 2008, and during this period, numerous WVU athletic teams have experienced success through several conference championships, post season tournaments and multiple bowl appearances with football.

Prior to arriving at WVU, Joseph served six years as an Assistant Strength Coach for the University of Notre Dame, where he assisted with football and directed programs for Baseball, Volleyball, Track, and Softball. Also during his tenure at Notre Dame, his teams experienced several conference championships and post season honors.

Before working at the University of Notre Dame, Joseph served as an Assistant Coach at Eastern Michigan University for three years. He was responsible for assisting with football and directly implementing programs for Men's and Women's Basketball, Baseball, Volleyball, and Wrestling.

Joseph began his coaching career as a Graduate Assistant at West Virginia University under the guidance of Al Johnson. He received his Master's Degree from WVU from the School of Physical Education.

Joseph was a four-year starter and three year team captain at Fairmont State University where he received a Bachelor's degree in Psychology and Biology. For one year following his playing career, Joseph served as the Strength Coach for Fairmont State.

During his coaching career, Mike has had the opportunity and privilege to coach several highly gifted and motivated athletes that moved on to the professional level in the NFL, NBA, MLB, and other professional leagues. He is always striving to motivate and mentor every student-athlete and instill the same work-ethic and discipline that he received from his coaches and mentors.

Coach Joseph would like to sincerely thank the mentors that had a major impact in his development in this field: Al Johnson, Dave Lawson, Mickey Marotti, Ruben Mendoza, and Tony Rolinski. All are great coaches and have a high level of character. He would also like to thank his current and former assistants for their loyalty, effort, and support.

Most importantly, he would like to thank his wife, Andre, for her support. Mike and Andre have two sons, Quincy and Brolin.